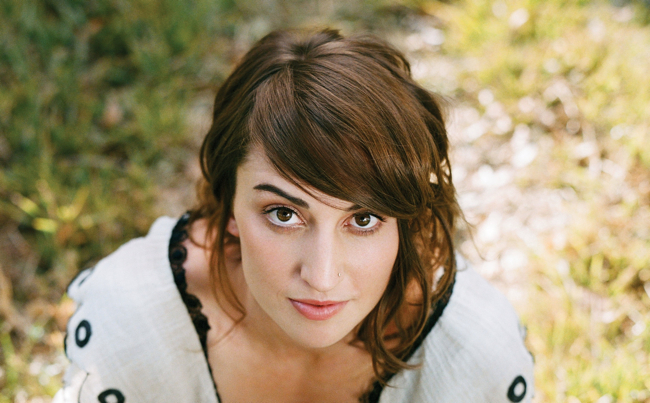 It’s been slow in music-land of late and I haven’t had time to digest some of the likely-great stuff I’ve got queued up (A Fine Frenzy’s new album and Miss Li of iPod Nano Commercial fame are both in line, also some old Anna Ternheim has caught my ear), so I decided to throw in a cup cake. Of course I’m a Sara Bareilles fan, it’s basically implied, and recommending Sara Bareilles to someone that likes the kind of music I post here is akin to recommending air as a possible breathing media. Look, they can’t all be people you’ve never heard of, alright?

I know you know Sara Bareilles. Little Voice is certified gold, she’s been on Leno twice, she was featured in a Rhapsody commercial (nobody’s perfect), Love Song is double-platinum and spent time as the #1 song on Billboard’s Pop chart. Her story is a warm fuzzy of what happens when good music finds a willing audience in the general public. I’m not posting Sara Bareilles because you haven’t heard her, I’m posting her because she’s absolutely amazing, positively one of the greatest voices on the scene right now, and I like her a whole whole lot. And I do what I want.

In a fit of what can only be described as…motivation, I actually went to a Sara Bareilles show. I’ve missed a lot of good shows. I missed Katie Herzig, I missed Brandi Carlile (second chance this October, with Katie Herzig no less, moral imperative much?), I missed Jenny Owen Youngs, I missed Rachael Yamagata (::ssiigghh::), but this one, I didn’t miss. I’ll tell you what it is that got me there, too. The voice. It’s launching a thousand ships, it’s drawing in the animals of the forest, it’s being bottled by faeries in case singing ever disappears. Powerful in a way most of her contemporaries can only long for, perfectly inflected with just the right amount of jazz, it is precisely the kind of voice you use as an example of what singing sounds like.

Everything she does on the album, she does better in person. She wails on the piano and sings her heart right out and just generally does it right. In my admittedly limited experience and for my money, there’s very little I’d choose over Sara Bareilles and a piano.

If I have one complaint about the album, it’s that it has a case of the “radio friendlies”. With the exception of the occasional obscenity (how could I love her more), there’s not a song on it that isn’t immediately ready for heavy rotation on the radio. I’m not saying that’s bad, it’s that kind of album I guess, but I’d love to hear some less produced tracks. I think there’s more depth to Sara Bareilles than we’ve heard. Hopefully her next producer lets a little more of the raw glory shine through.

Come Round Soon is what passes for “gritty” on Little Voice (I say that like it’s a bad thing), and Gravity is my favorite Sara Bareilles song by a wide margin. Enjoy them, that’s an order. If you don’t have this album already, go get it. This is one cultural phenomenon you should feel good about giving in to. In case you need an example of the other thing, reality television is a cultural phenomenon you should feel bad about giving in to (oh snap!).

Also, everyone wave to Technorati: 2yig9xbfkt. I know most people put in a post with the claim code and then delete it. I’m going a different way.